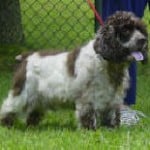 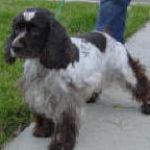 Peanut is a 6 year old Cocker Spaniel who was surrendered to our facility back in August 2006. He was a shaggy looking boy with a Cherry Eye. After a few months at our facility, not many people showed interest in him and we didn’t understand why. It was time to step in and make Peanut more appealing.

Eleanor George, from Friends of SOCAS was called in to professionally groom him and the Friends also funded the surgery to fix his eye and neuter him.

Not too soon after, Peanut became a popular boy and was adopted.

Peanut’s happy ending was all made possible by the Friends of SOCAS.