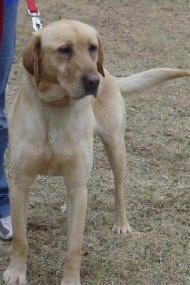 Bam Bam is a fantastic, 5 year old Yellow Lab who originally entered our facility and our hearts back in 2004. He was surrendered to us because he was living in a home that was overwhelmed with dogs. After a short stay with us Bam Bam was adopted out to spend the rest of his life with a family in Jackson, N.J. All of us here were confident that he would do very well until we got a phone call in February of 2007.

The phone call came from a woman down in North Carolina. She had found Bam Bam wandering down her street with our shelter tag attached to his collar. After lots of research and hard work, she was able to track down the owner who apparently moved down to North Carolina. The family seemed quite happy to have their boy back. Again all seemed well, until we got another phone call saying that Bam Bam was on the loose again. After researching even further we had found out that the family was unable to have a dog in the place in which they moved so they were keeping him in an abandoned home. Instead of being returned to his owner, Bam Bam found himself in a high kill shelter down in North Carolina.

We were contacted by the shelter and told that we have only 5 days to get him out, or the possibility was very good that he would be euthanized due to space constraints. After making some phone calls to a couple of very caring people, they were able to get him pulled in a couple of days and into a vet hospital to receive some general, but necessary care. After two days in the vet hospital, Bam Bam was transported back to our facility where he underwent Entropia surgery on both of his eyes. All this was made possible by the funding from our Friends of SOCAS and the surgery performed by Barnegat Animal Clinic. Thru the entire process this guy has been an angel. Even after all he had been through he was very tolerant and loving to all who were involved. Only two days after his surgery, Bam Bam found himself a wonderful loving home with an active little sister. We want to thank everyone involved in bringing Bam Bam back home.